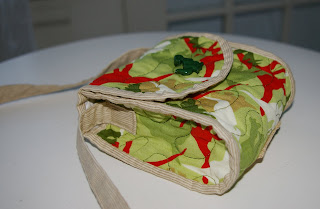 My son requested a camera bag and it just so happened that a tutorial was just posted for a camera case that I modified a touch (1/4″ bigger all around, Velcro enclosures instead of snaps, and a strap) and voila, he had his camera bag! The tutorial can be found here:

http://amyalamode.wordpress.com/2009/01/28/cozy-camera-case-tutorial/
I made the bag a bit bigger than necessary so that his camera could fit in either vertically or horizontally since he is only 6 and I wanted it to be easy to use. The pouch on the back holds extra batteries. This would have been helpful on Saturday when we went to the zoo and his camera shut off due to low batteries after he took only two pictures. He wasn’t happy! I made a strap that is long enough so he can wear it over his shoulder and across his body so it won’t go anywhere. We happened to have this scrap of dinosaur material in the house from a t-shirt applique that I made for him last summer. I also had the dinosaur button on hand so we added that for a little fun. He loves it!