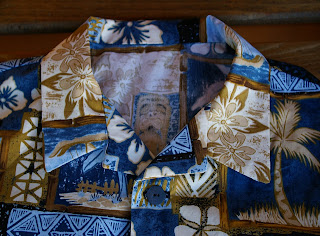 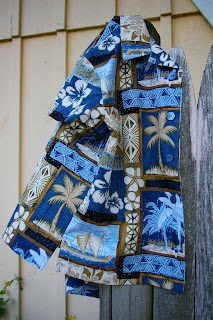 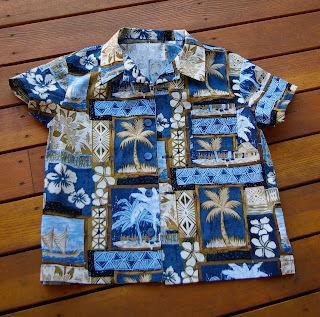 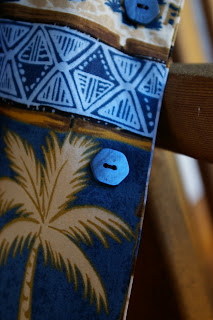 Well the shirt made from the material from the now infamous trip to JoAnns is complete. Now my son has his Hawaiian shirt to wear to the Kindergarten Luau. I made the shirt using the Simplicity 5581 pattern. I took my son’s measurements and they were on the upper edge of the size medium range. I decided to go with large, hoping it wouldn’t look too big now and that he could wear it again next summer. Well, it fits him perfectly so I am so glad that I didn’t go with the medium because I would have been furious! The shirt gave me a bit of trouble. I was confused by the directions for the collar but my mom was nice enough to help me figure it out. Then the sleeves were a little tricky to set in because there was so much material to try to ease in without letting it gather up. I had to put it down several times and come back to it because I was getting upset! I think that I could make another one much more easily now that I got through this one. I made the mistake of saying that out loud and my husband said, “Oh good, I was hoping you’d say that because I would like a matching one.” Ugh! I said I could make another but not that I wanted to! He is jealous that I used the blue hexagonal buttons from my button bag on the shirt because he likes them and I only have two left now, not enough for a second shirt. There is no chance of getting more because I bought them in high school when our local Piece Goods Shop was closing and they were on clearance.
I didn’t want to force my son into a photo session so I will wait and take his picture in the shirt on the big luau day and post it then!