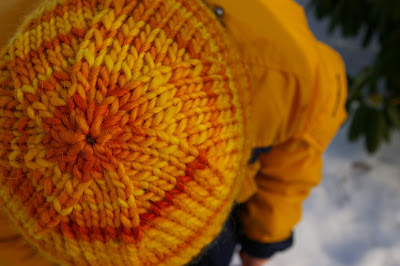 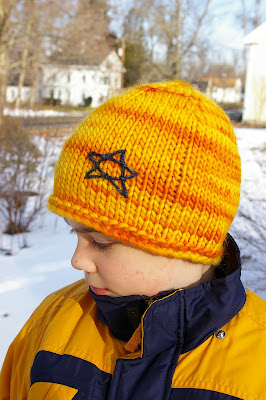 I finished my son’s hat. Thank you Pomona for the advice. His hat does not have the pointy top which, although cute for his sister, would not be quite as cute for him. If you are scared to attempt to knit in the round with double pointed needles (as I was until I gave it a try on these hats), you have to go read Pomona’s post on the topic. She took lots of pictures and has great directions. She also links to a great starter’s pattern that I now want to try.
Again I followed the Wool Noggin pattern and used Lamb’s Pride wool. He picked out the yarn for his hat, as did his sister. I think it matches his coat perfectly and it reminds me of butter and sugar corn on the cob. He liked the embroidered star on the pattern so we added one of those too.
I have to remember to stop buying wool for projects because I am allergic. I don’t seem to have a terribly strong allergy but I was tested positive for a wool allergy as a child. If I wear wool, I can only do so for brief periods. Handling it while doing the laundry doesn’t phase me. But knitting with it does. I think that little fibers scatter about as I knit and that is what does it. My throat gets very uncomfortably scratchy and my eyes itch too. But wool is so appealing. What a shame!