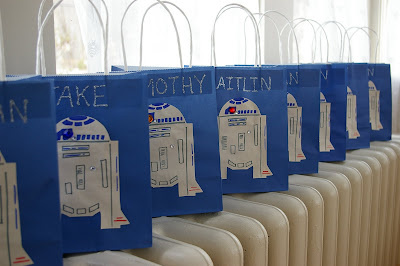 Lately, much of my creative energy has been directed toward preparing for my son’s 7th birthday. He wanted a Star Wars themed party. Above are the goody bags. I made quick little R2D2s out of construction paper and added a couple of “jewels” to each for the robot’s buttons. 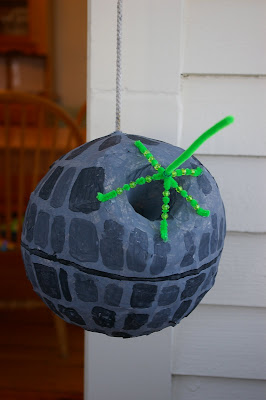 I made a paper mache Death Star pinata complete with shooting green lasers. It was filled with Hershey Kiss chocolates. The kids broke it with a long, thick dowel painted with blue glitter paint. The end was wrapped in silver duct tape for the handle. It broke really well, slowly in bits and pieces. They would all scatter to pick up the candy, the next would hit the pinata and they would squeal and run around and pick up more. 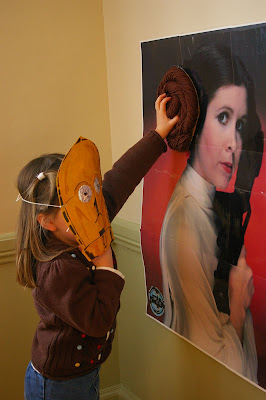 This one makes me laugh. I found a picture of Princess Leia and my husband printed it out on 9 sheets of paper that I taped together. I then covered the bulk of the poster with clear adhesive contact paper. The kids wore a C3PO mask that I made so that they couldn’t see and attempted to “Pin the Bun on Princess Leia.” The bun is brown yarn wrapped and hot glued to cardboard. The picture above was staged! They didn’t really get quite so close to the correct placement.
The kids also did a craft project. They made TIE fighters out of egg cartons and cardboard. I had precut the wings and pre-glued the egg carton bodies. The kids decorated the wings and then we hot glued them onto the bodies for them. They spent awhile flying them around the house, especially around the Death Star pinata. There were a few TIE fighter crashes requiring hot glue repairs which seemed to excite them to no end. 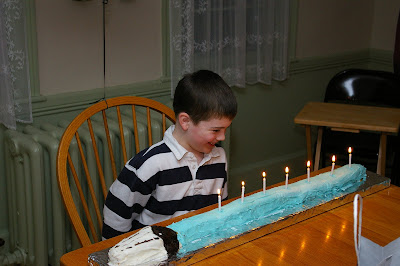 My son asked for a lightsaber cake. Cake decorating is not my strength but he was very pleased nonetheless. All in all, it was a great success! I am having a hard time believing that my little boy is 7 though.
To make this post relevant to a mainly sewing blog, he has requested a Star Wars quilt. I am mulling over ideas.