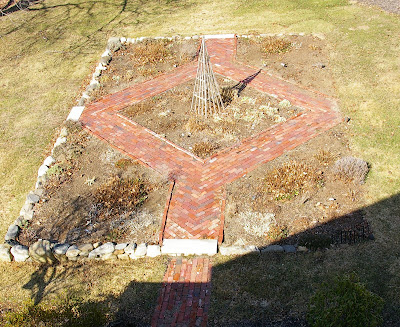 I live in New England and about a week or so ago, we had several days of torrential downpours and strong winds. Our old house (circa 1840) began leaking in places where it doesn’t during regular rains. I was up in the attic checking on the major leak, down one of the chimneys, when I noticed that I had a particularly good view of one of my perennial gardens from the attic window! Following the rain, we had a few beautiful sunny days and I got out there during quiet time to clean up the garden. I took this picture from the attic and plan to take pictures as the season progresses. It sure isn’t much to look at now but it has great bones! The layout was inspired by a book on the gardens of Colonial Williamsburg. My husband built the rock wall and laid the brick paths for me. Many of the bricks were found on our property. He also made the obelisk in the center, several years ago. I filled up the garden beds with soil/manure from under the barn and planted perennials that I spilt and took with us when we moved here about 3 years ago. The garden is still young but it was doing fairly well until some burrowing critter moved in. He caused some trouble last growing season but really outdid himself over the winter. There are tunnels and piles of dirt in many spots in the garden and he ate and killed four Liatris plants and a sedum. There is probably more damage but the plants are still too dormant for me to tell. I think I am dealing with voles. We have two barn cats who hunt for them but apparently they are not doing the job. Does anyone know of an effective way to get rid of voles?