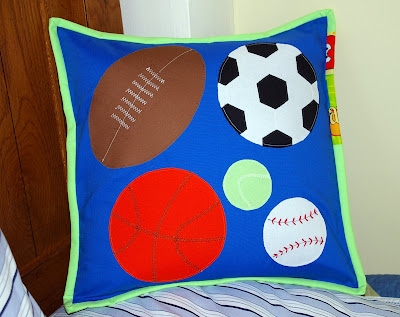 My nephew, Dylan, is turning 6 tomorrow. Not too long ago, he had his first loose tooth so I whipped up a tooth fairy pillow and sent it to him. My sister doesn’t sew at all so I knew that if I didn’t make one, she’d have him use a ziploc baggie! I couldn’t have that. It was a super simple pillow with a baseball applique. My sister told me that he loves it so much that he sleeps with it every night. And apparently, he is jealous because I made his brother a monkey tshirt for his birthday present and he wanted something else made by Aunt Amy. I was so touched and flattered. After consulting with my sister, we decided that a larger pillow, more appropriate for sleeping with than a tooth fairy pillow, would be the perfect gift. 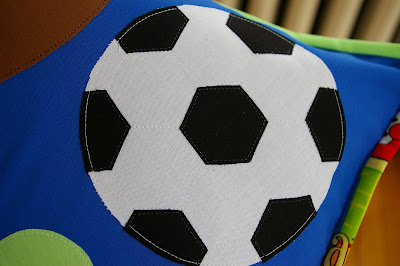 For Dylan, it has to be covered with balls. 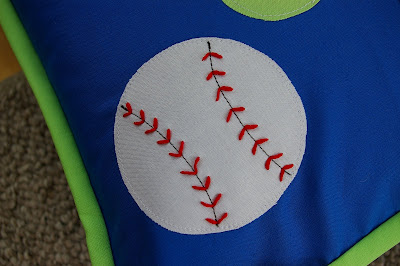 I appliqued a football, tennis ball, baseball, soccer ball and basketball. I hope he likes it. I admit that I pushed this project off a bit because it isn’t as appealing to me as printing linocuts and making little feminine patchwork items. But I had fun with it and I look forward to hearing about its new life with Dylan. I will hear it through my sister, not Dylan, because he is too cool to care about a pillow (but we know otherwise thanks to my sister).