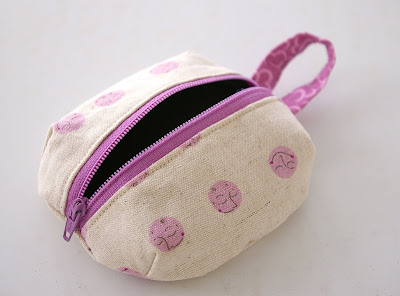 I made the smallest of the Ditty Bags from Keyka Lou’s new pattern. I like to call it the itty bitty ditty bag. Do you think I could get her to rename the small version accordingly? It measures only 5″ x 4″. 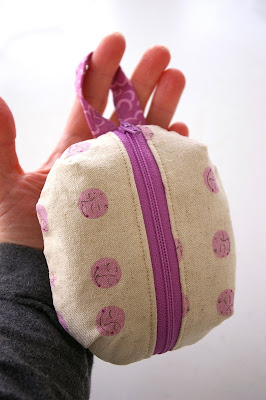 I took this picture to help with the scale but then realized that it doesn’t quite work. You see, my hand is the same size as my eight year old son’s hand. Anyway, the pouch is tiny. I would have started with one of the two larger versions because they might be a touch more functional and a little easier to turn, but I only had a 7″ zipper in the house. I used my coveted scrap of linen “Lavender Man on the Moon” Heather Ross material received in a swap from chickenjulie. I wanted to save it for just the right project and there was just enough to cut this pouch with zero waste. And, it matched the one zipper I had on hand. It was fate.
Today I went grocery shopping and brought along my new reusuable bag. The bag has pear and apple fabric and the bagger filled it with my fruits and vegetables. That made me smile. I’d have done the same thing.