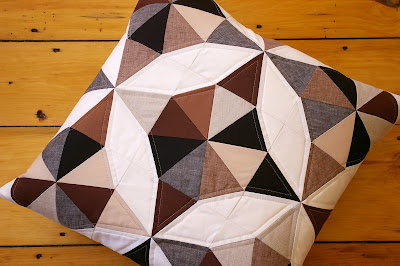 The pillow that I made for a private swap with Nicolette arrived in Holland yesterday. I can’t believe that it only took 5 days to get there! Nicolette and I had originally planned to make pillow covers with free pieced words. However, we both had a hard time settling on words for each other and decided not to stress ourselves out and just make pieced covers. Nicolette described her living room area as a combination of many wood tones, chairs and couches made of black and sheep leather, white walls and off white linen curtains. Her accent colors are blue and dark brownish red. I decided to play it safe and just use all the neutral tones in hopes that her pillow would match her home. Since she also said that she loves linen, I used three kinds of linen: natural linen, black slub linen and tobacco slub linen. Then I used Kona snow, espresso, sable, black and khaki. 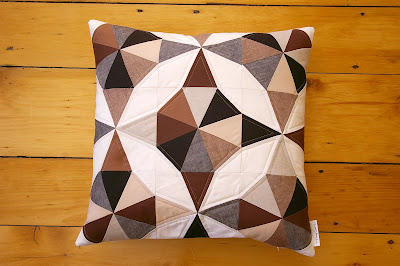 The pillow design was inspired by Angela’s kaleidoscope pillow that both Nicolette and I have marked as a favorite in Flickr. I had never made the kaleidoscope block before so I contacted Angela for a little “how to” information. Unfortunately, she had used a special ruler purchased from Etsy. I didn’t want to spend the $25 on a ruler and I wanted to get started. She also pointed me to the quilt along on Sugar Stitches. They also used a special ruler but the tutorial explained the construction methods at least. Then I found this free pattern. I printed it out and then trimmed it down to measure 6 1/2″ since I wanted finished blocks measuring 6″ to make an 18″ pillow cover. I used this paper template as my “ruler” and it worked! I have to say that this block creates a tremendous amount of waste. I was shocked. I can’t imagine making a quilt as a result! 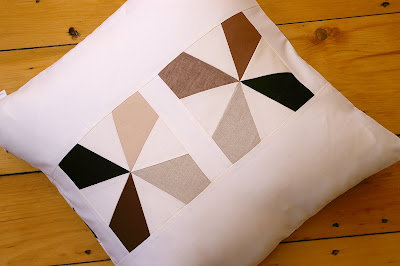 Twice I miscut blocks so I used them for a pieced back. The pillow has an invisible zipper enclosure. I hope it is happy in its new home! 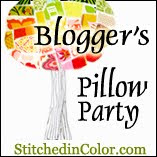