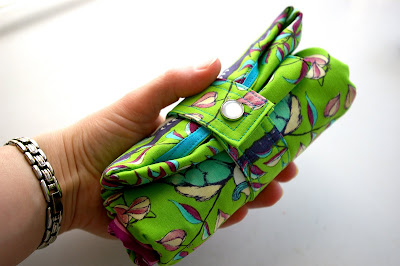 I finished my practice Wrap It Up bag. This is one of the four patterns that we are allowed to use for the Potholder Pass 7 swap. I wanted to give at least two of them a test run before choosing the bag that I would make for my partner. This bag has the nifty “wrap it up” feature. There is a strap that attaches at the top of the back of the bag. Then you fold the bag into thirds, roll, and snap. 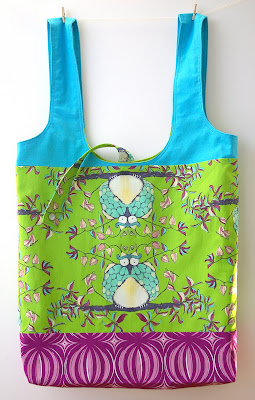 I used this owl fabric by Tina Givens that I received in a swap from Amy. The fabric is bold and bright and large scale and I haven’t known what to use it for till now. I thought it would work well on the bag since the design wouldn’t have to be cut up. I fussy cut a bit to get the owls centered on both the front and the back. I pieced the bag front and interior for a little more interest…and since I only had a half yard of the owls and needed 3/4.
This bag was fun to make and I like the design. Comparing it to the Keyka Lou bag that I tried out a few days ago, I would say that it does not work as well as a grocery bag. The gussets are not nearly as deep so it isn’t meant for packing with groceries. It would be a great bag for running into a drug store or some other quick trip with just a few purchases. It has a nice style too!
Penny, thank you for offering our group a discount on your pattern! I will definitely make it again.