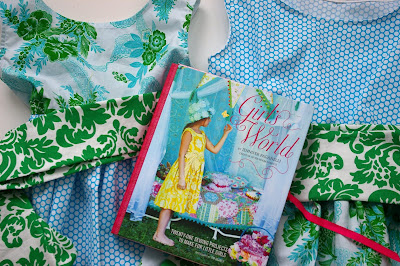 I won a copy of “Girl’s World” by Jennifer Paganelli from a giveaway at a lovely blog called Flossie Teacakes. The giveaway included an online sewalong class for the cover dress, “Mary’s Fancy Sash Dress” and a discount on “Queen Street” fabrics from Fabric.com in order to make that dress. While I didn’t join in on the class, I took advantage of the discount and purchased fabric to make dresses for both Lily and Penelope. I was a little worried when I read the pattern and it described the dress as loosely fitting and able to slip over the head. 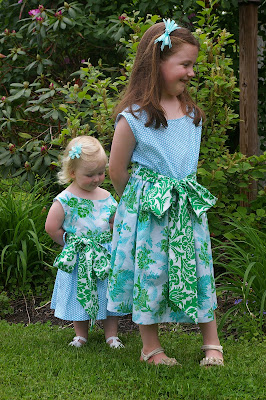 I went ahead and gave it a shot and have to say that I am disappointed. The necks are very big and gaping, even though I measured the girls’ sizes properly. Lily’s dress stayed on her shoulders fairly well but Penny’s just kept slipping off her shoulders. Perhaps it will be more suitable for her next year. I think it will be long enough as I hemmed them with this thought in mind. The sashes also seem much longer in person than they did in the photograph. I think I may have Lily use Penny’s sash this year. The other dresses in the book look like they have a bit more fit to them and the Josie dress has a zipper. I think I am most inclined to try that one next. I think that a slip on dress without any zippers or buttons just might be too good to be true for my liking at least.
I chose the picture above because I love the “monkey see monkey do” posing. Penny just loves to copy Lily and it drives Lily crazy!