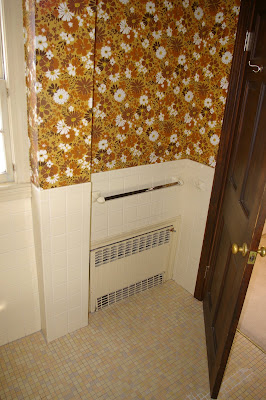 This is how our upstairs full bath looked when we moved in about five years ago. I know, I know, The Brady Bunch could have filmed here right? A good friend told me that our kitchen counter tops are the exact same color as the Brady’s but that’s a story for another time. We haven’t gotten to kitchen renovations yet. 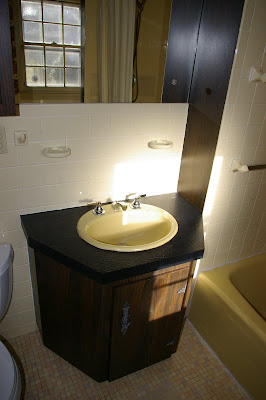 Not only did we want to renovate the bathroom for cosmetic reasons, it was very necessary too. The tiled shower walls were leaking into the wall board. I was under strict orders not to wash them because my husband feared that the tiles would fall in. There was a big patch of rot along the edge of floor by the tub. As you left the bathroom, the one inch yellow gold tiles would occasionally stick on your feet and exit the bathroom with you. This happened so often that we had already thrown out a patch of tiles about one foot square by the doorway long before the dumpster arrived and renovations began. 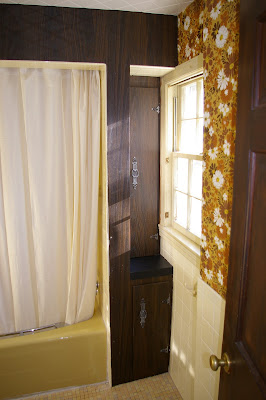 The wall radiator, that you can see below the towel bar in the first picture, was the heat source for this room. I have to say that I loved the way that it dried and warmed my towel for me (I was the lucky one who got that spot!). But it also caused horrible ice dams in the uninsulated exterior walls of our 1840’s house. This summer, we have been working on renovating the bathroom. I thought I would share our progress. 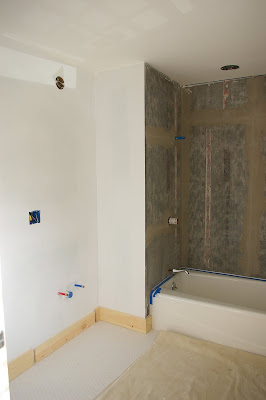 The room was gutted. We decided to move the tub all the way over to the right wall and move the window to the opposite side of the beam. This will make for a much more normal layout. 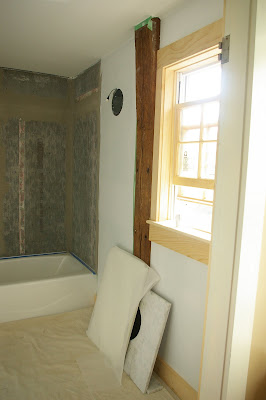 When the room was gutted, we decided to leave the beam on the outer wall exposed. I love the look of those hand carved beams. Isn’t it neat to know that is what’s holding up our house? They are exposed in a couple of spots in the house but in the majority of the rooms, we have them boxed in. 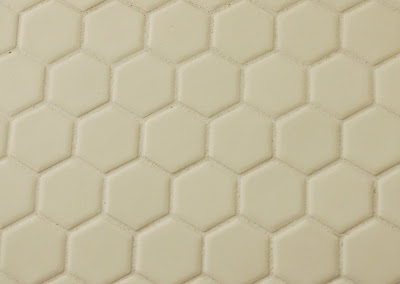 The wall radiator was removed and my husband installed radiant floor heating instead. The floor tiles are now 1″ white hexagons. We hadn’t fully opened our “soft white” vanity that we ordered on line until last night. We discovered that the “soft white” that looked very white on our computer screen was actually very, very ivory. So the vanity is in the barn now and we are painting it a light grey. I have the paint for the walls ready to go, as well as the material I showed you recently for the curtain and shower curtain. If I don’t post too much for the next week, it’s because I have been recruited to paint!