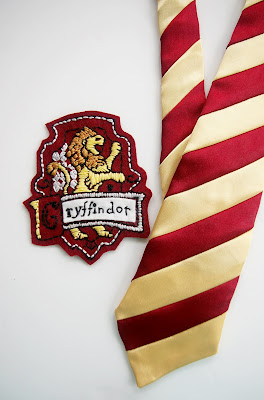 My son is eight years old and obsessed with Harry Potter. I am thrilled to death about that because it was Harry Potter that really got him interested in reading independently. He has always loved books and still loves being read to but it was hard to get him to want to read alone until he discovered this series. Now it is hard to get him to go to bed at a reasonable hour! Of course, he wants to be Harry Potter for Halloween.
As a mommy who can sew/craft, I feel compelled to make a least part of each costume, if not the whole thing. He will wear black pants, a white collar shirt and a grey vest so that just left the tie and the Gryffindor patch. I felt obliged to make them. I wish I hadn’t after looking at how cheap they would have been to buy and how long they took to make!!
I used this great tutorial for the tie. I have used it before and it works up very nicely until you try to make it with bias cut, ravelling, slippery, Halloween costume synthetic material. Then you have a little nightmare on your hands. I decided to foundation piece the stripes on paper to keep the diagonal pattern going pretty consistently. It turned out ok. It’s not perfect on the back, but the back won’t show.
I thought that I could make the patch out of felt till I saw all the detail involved. Then I decided that I would have to embroider on the felt. I have very rudimentary embroidery skills but it’s only a costume. I tried to simplify the patch design as much as I could while still getting the look. I am happy to say it is done because it took several hours!
Now I am working on my daughter’s costume. My youngest is wearing a costume I made six years ago, phew!