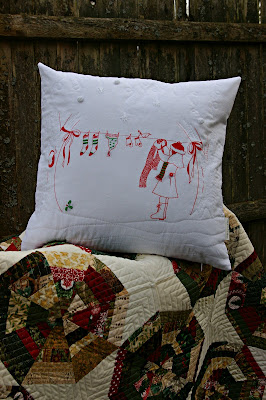 A bit ago, I made a pillow cover using my Winter Wash screenprint in Stormy Blue. I knew at the time that I wanted to make a second pillow cover using the Winterberry red version. My goal with the stormy pillow was to add dimension with no added color. This time, I wanted to create a very traditional, sort of homey Christmas pillow in red and green. 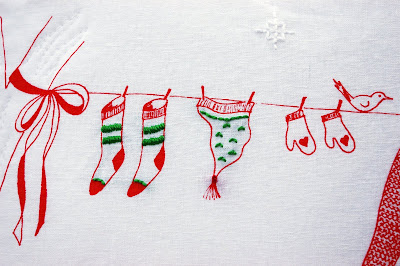 I embroidered some snowflakes in the sky and also used three of BasicGrey’s vintage buttons as snowflakes. I added a touch of embroidery to the woolens in green embroidery floss. 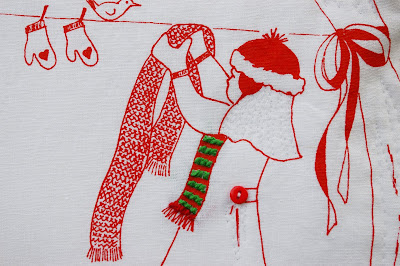 I filled in the white stripes of the girl’s scarf with green embroidery and used red french knots at the top of the tassels. I also stitched a tiny red button onto the coat. 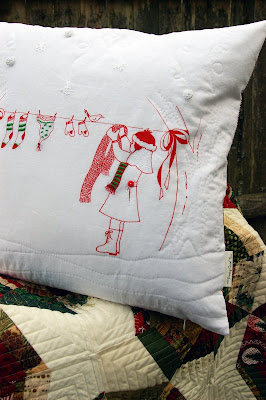 I then added some details to the landscape using free motion quilting, as I did with my first pillow. I forgot to take a picture of the pillow back but it is a very traditional Christmas stripe in red and green with holly and berries.
I gave this pillow to my mother as an early Christmas gift so that she could enjoy it throughout the Advent season rather than receiving it just in time to put it away!

Did you notice my blog’s new look? The header has been improved and the sidebar is finally all sorted out. I have been struggling with it for some time now but my wonderful friend and former neighbor, Sally, is a web designer and helped me out! I haven’t seen Sally in nearly three years now because she and her family moved to London. I miss her but working with her even long distance was fun! Thank you Sally!