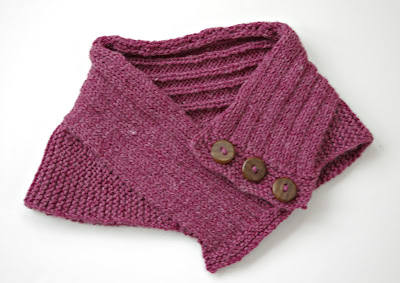 (edited to add: Allison just informed me that the cowl is upside down here! I just took it off, flipped it and put it back and and what do you know? It looks even better. Eye roll)
Yesterday, I received my swap from Allison who blogs at field wonderful. Isn’t it beautiful? I tried to take a picture while wearing it using the mirror and let’s just say that didn’t work out very well. First off, it showed how dirty the mirror was! And secondly, it was too dark to work without the flash and flashes and mirrors apparently don’t mix! It’s so funny that she chose this cowl pattern because I think it is the same pattern that we gave my mother-in-law along with yarn and buttons, for her Christmas present. I chose the pattern for my mother-in-law and Allison chose it for me. As Mark made the buttons for his mother’s cowl, Allison made these! See here. I felt pretty honored that she shared some of her handmade buttons with me. In fact, she looked for a cowl pattern that used buttons because she knew I’d appreciate them. 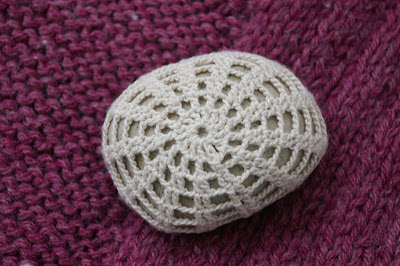 I had mentioned how much I liked her crocheted stones as one suggestion when we were talking about what to swap. In my mind, it was an either or but she did both! I really adore it.
It was another wonderful swap with a blogging friend!