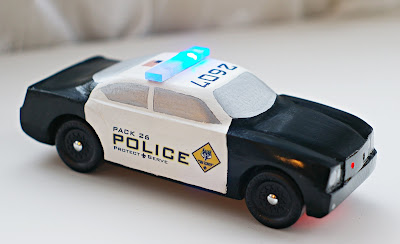 If you have been wondering why my husband hasn’t gotten any new seam rippers into my shop lately…this is why. He has been spending every spare second on his Pinewood Derby car. No, he isn’t a cub scout…my nine year old is. He is the den leader for my son’s troop and likes to make a car each year as well. He printed many an image of police cars from the internet to sketch the profile of the car, the front, the back, the top. Everyday when he’d get home from his commute into Cambridge, he would report on the coloring schemes of various police cars he saw in his travels. He made water slide decals for the sides of the car and for the top, using the den number. He then dissected light up balls from the dollar bins at Target in order to use their blue and red LEDs for the lights on top of the car and in the front. He welding them all together and there is a little mercury tube in there and when it is flat, at the bottom of the ramp, the lights should go on. Let’s hope it works as he plans or he will be so disappointed. He expects his car to be slow so it should have its lights on as it trails the faster cars in the race. I am off to see the race now and hoping to sell some of our excess girl scout cookies from our Daisy troop while I am at it!