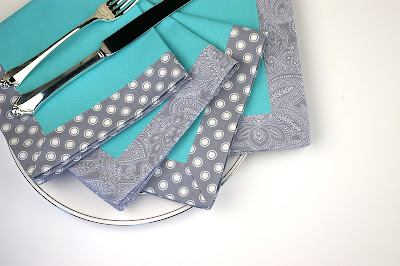 For quite some time now I have been leading a swap on Flickr called the Potholder Pass. After ten rounds, my potholder drawer was quite full and I wanted a change! I left that swap in good hands (sign ups are now open for PP11) and moved on to a new swap called the Table Talk Swap. We are in the middle of our first round of swapping. This time we are trading cloth napkins in sets of four. We are using the following tutorials: Linen Napkins with Quilting Cotton Edges by Penny at Sewtakeahike, these and these from Film in the Fridge, and three different napkin tutes from Purlbee. 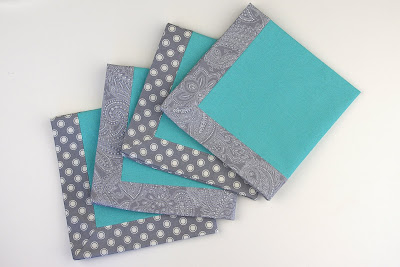 I love the look of Penny’s design so I went with that tutorial. I used my favorite Medium Aqua Essex Linen from Marmalade Fabrics. I think it is a nice choice because it is a linen/cotton blend. It gives you the linen look but isn’t as shifty and difficult to sew with as 100% linen. It also wrinkles less. I used two different fabrics for the edges, a dot by DS Quilts from JoAnns and Half Moon Modern paisley in grey available here.

This is a great tutorial but I have to warn you that those edges are a little bit tricky! You want to make sure that that the borders are very close to the seam on the back so that they are caught into the top stitching but not extending far beyond. It has everything to do with the angle at which you sew the corners and some fiddling might be necessary; I know it was for me. But I love the finished results and hope that my partner will too!

Oh, another hint…when making things like napkins that are sure to be washed and used over and over, prewashing is critical. You don’t want to take the time to make something like this and have them shrink unevenly. Often your linen will shrink more than the quilting cotton and you will end up with napkins with puckers.