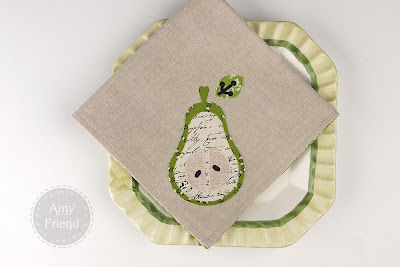 Today, I would like to share a tutorial for making a set of four cloth napkins with pear appliques.  I love them for any time of the year in my green dining room, but wouldn’t they also be great for the fall and Thanksgiving when decorating seasonally?  I don’t enjoy eating pears all that much but I love pear designs.  Go figure!﻿ 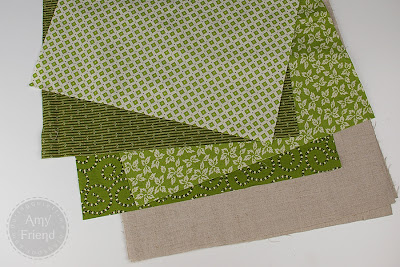 First I prepared my fabric.  I always prewash when it comes to something like napkins that will be frequently used and washed.  I cut four 16 1/2″ squares of 100% natural linen for my napkin fronts (This project is FQ friendly!). I used four different DS Quilts prints in green (widely available at JoAnn Fabrics) for the backs.  They were also cut to 16 1/2″.﻿ 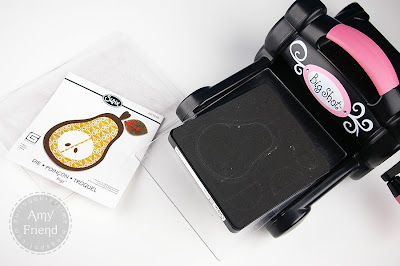 I used the Sizzix Big Z Die Pear by Basic Grey and my Big Shot to prepare the appliques. 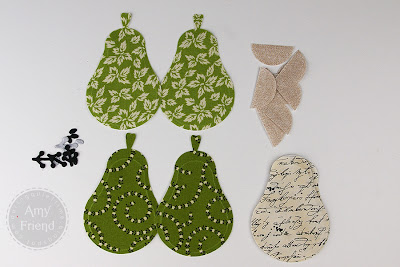 To create the appliques, I first applied Steam a Seam 2 to the wrong side of my fabric selections.

For the pears:  more of the same DS Quilts prints
For the leaf veins and seeds:  Quilters Linen by Robert Kaufman in black
For the inside of the pears: Script in Cream by Timeless Treasures available at Sewmeasong and The Fat Quarter Shop
For the center most part of the pear:  Linen Texture by Timeless Treasures also available at Sewmeasong and the The Fat Quarter Shop

I cut off the stem portion on the inner pear. 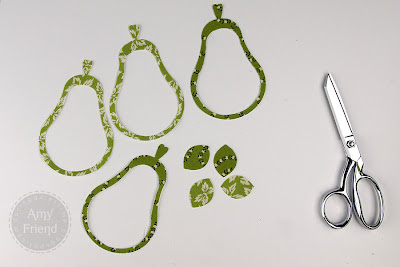 Then I used scissors to help separate the inner pear from the outer pear.  Instead of throwing out the center pieces, I used them to cut the leaves. 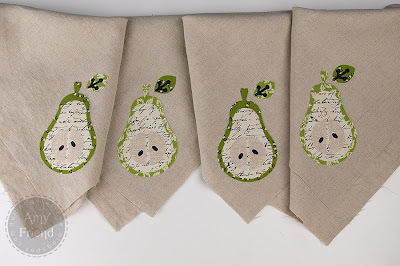 Then I fused the applique to the corner of each napkin, 1″ in from the sides. 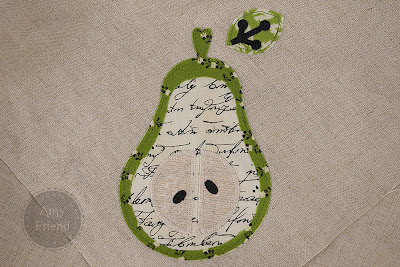 I used a straight stitch to edge stitch around the pear and the leaf.  I used a tight zigzag around the innermost part of the pear (the core pieces). 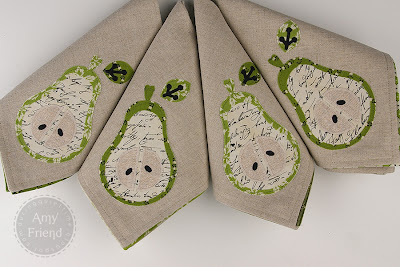 Take your linen and a piece of your backing fabric.  With right sides together, using a 1/4″ presser foot, stitch around the perimeter leaving an opening for turning.  Clip corners, turn, hand sew the opening closed, and press.  The final step is edge stitching around the perimeter of the napkin.  I used beige thread on top and green in my bobbin.  A tip:  use your walking foot to avoid wavy edges caused by tugging and pulling as you stitch around the edge.  Your napkins will lay flat this way!
Enjoy!