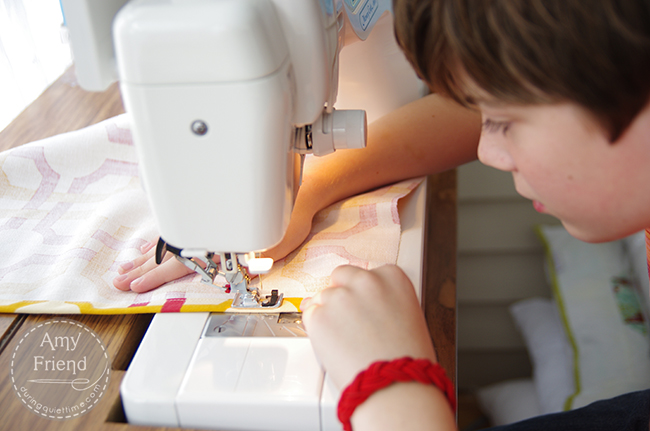 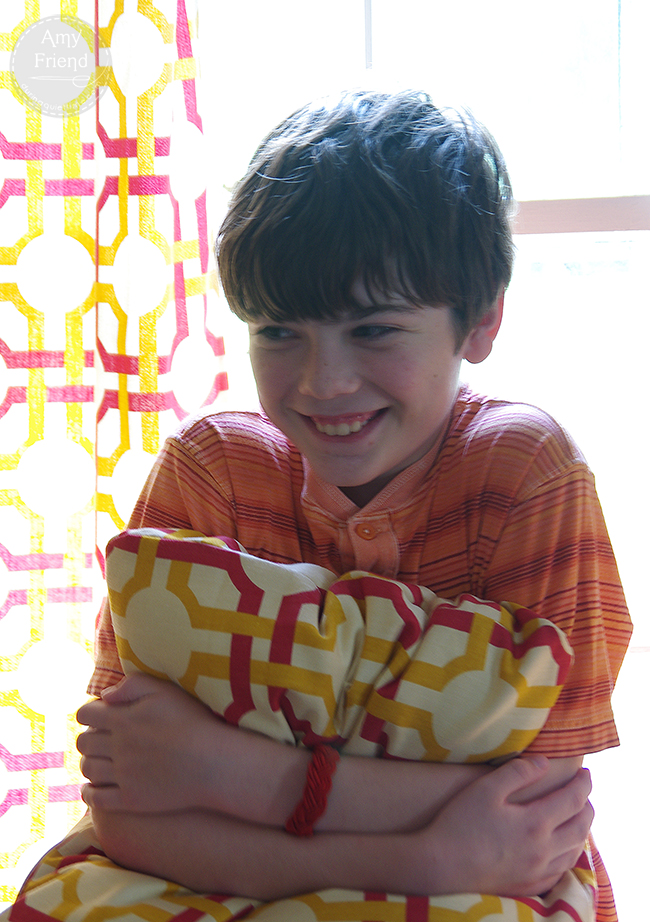 If you are a regular reader of my blog, you know that my children and I are participating in Sew, Mama, Sew’s FunStitch Studio Summer Camp.  You can read my first post here.  Basically, we are trying out some of the projects in a series of books from FunStitch Studio which is a children’s book imprint from C&T Publishing. 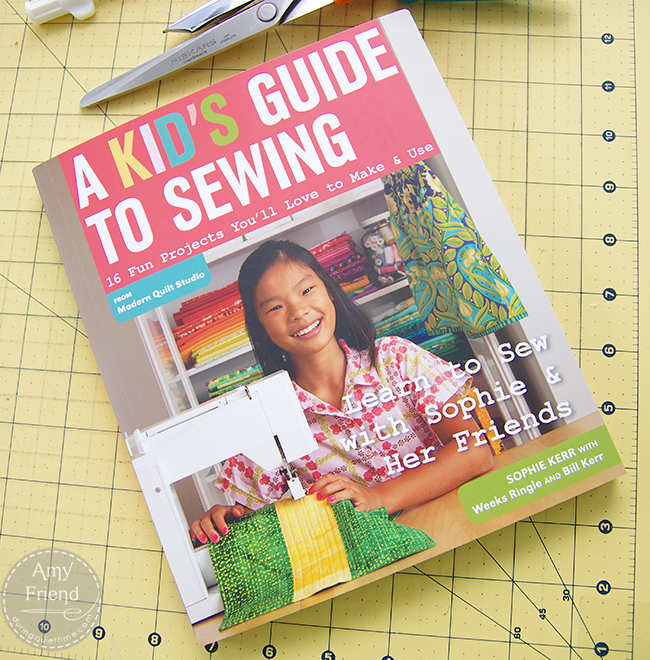 Today we worked from A Kid’s Guide to Sewing by Sophie Kerr with Weeks Ringle and Bill Kerr, which is a great starting point for teaching a child to sew using a sewing machine.  This book is more focused on machine sewing than hand-sewing.  It will probably remind you of the kind of projects you made when you first learned how to sew.  I know that these are the sorts of things I made growing up, just following verbal instructions from my mom: a simple pillow cover, a simple skirt, a drawstring bag, etc. It would be a great resource for a parent without an extensive sewing background. You could learn right along with your child. 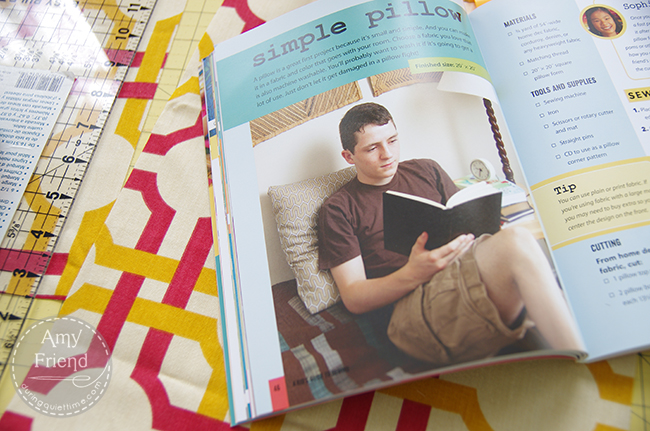 Timothy chose the “simple pillow” project.  It might have had something to do with the fact that the photo in the book featured a boy which is somewhat rare in sewing books.  But I think it was partially because he recently chose material for new curtains and I had some leftover that I had alluded to using some time in the future for a pillow. Perhaps it was just his way of making sure he got that pillow! 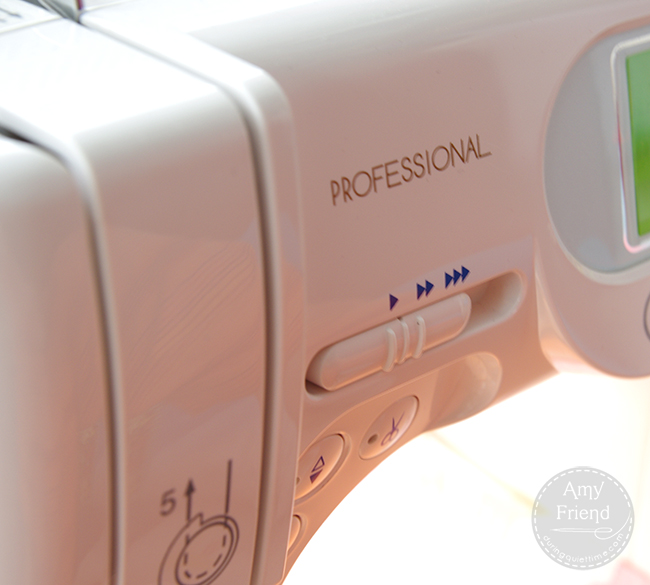 Timothy has only used the sewing machine a few times.  We have worked together in the past to make a bag and a couple of pillows with handsewn closures, but never an envelope closure like this one. And this time, he wanted to work pretty much alone. I helped with the cutting but he did his own ironing, pinning and stitching.  If you have a machine that allows you to adjust the speed, I highly recommend using that when teaching children.

Here he even used the edge stitching foot to carefully top stitch the rolled hems for the envelope closure. This project gave him a chance to top stitch, stitch a seam including curved corners, and use and overcast stitch. 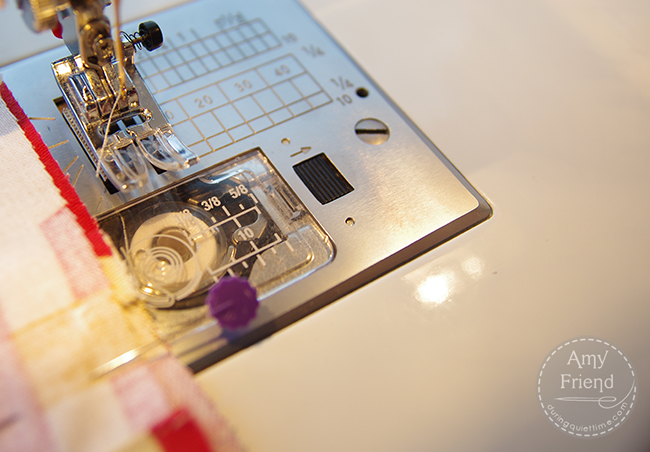 Now that he is a little older, we could have discussions about measurements too and threw a little math into our project.  We had an 18″ pillow form in the house, not the 20″ form that the project called for, so we discussed what had to change in the cutting directions.  Then he needed to stitch with a 1/2″ seam allowance so we had a little review of fractions on my sewing machine guide above. 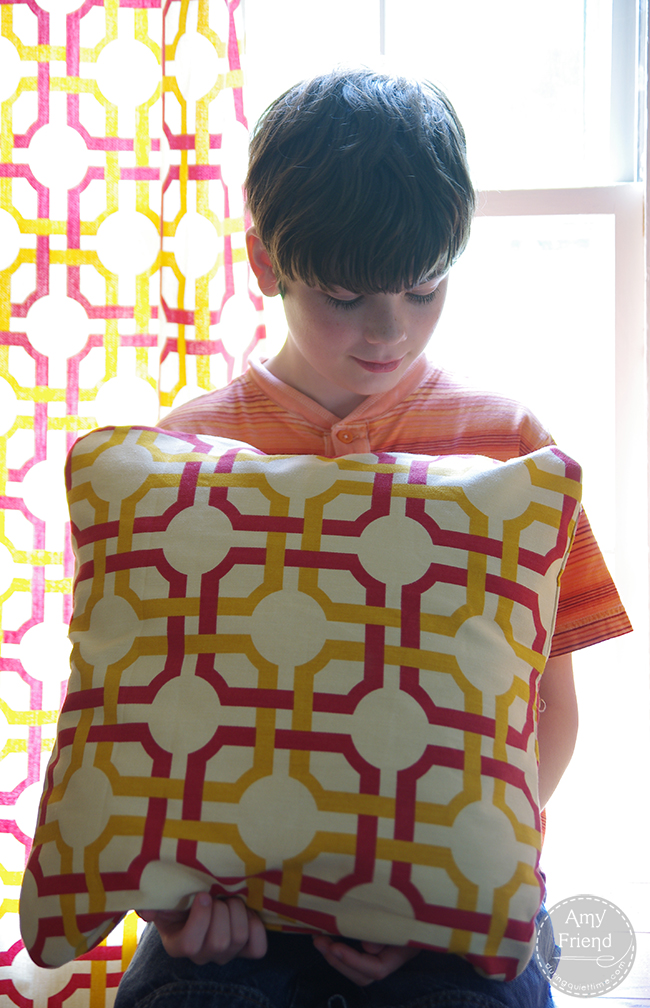 He’s thrilled with his pillow cover and loves the fact that it is washable so he can use it and it doesn’t have to be purely decorative like the ones he stuffed and hand-sewed closed before.