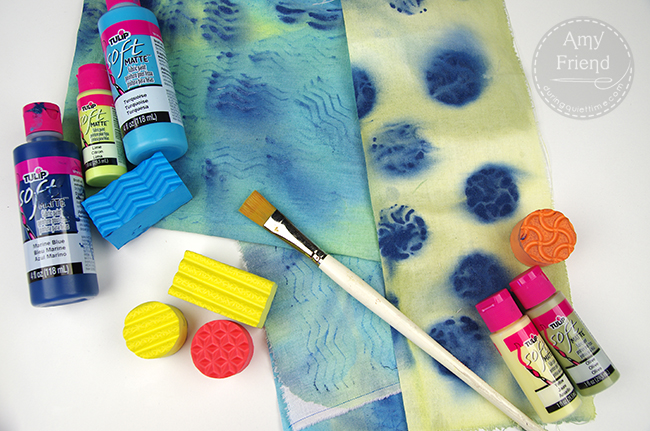 It’s a scary thing when people at your children’s school learn that you can sew, isn’t it?  Of course, I am actually really happy to help but these projects are always more time consuming than I think that they will be!  At our elementary school, each grade makes something in art class to be auctioned at the PTO auction.  The second grade tends to do something fabric related which involves a little more parental assistance than some of the other projects and low and behold, I have a second grader. I came up with the idea of painting fabric with the kids which I would then turn into pillows.  I thought I would share the “how to” with you in case you would like to tackle something similar!

I worked with two art classes at two separate times.  Each time, the group was just over 20 children.  We covered a table with plastic cloths and set up two stations.  At each station, I set up a piece of prewashed Essex cotton blend white fabric cut to about 10″ x 14″ or so.  Then I set up cups of watered down fabric paint.  We called the children up 2 at a time.  One child would paint lines using one of the background colors then a second child would paint stripes inbetween using the other background color.  One class painted with olive and yellow.  The other painted with lime and aqua.  The paints were thinned substantially with water to encourage bleeding.  Then a third child was called up to stamp.  I used the foam children’s building blocks seen above to stamp.  They have great textures.  I squirted a little paint, not watered down, onto a paper plate.  They placed the stamp in the paint and then onto a scrap piece of paper and then stamped the fabric.  The fabric was then hung to dry.  Due to the wet backgrounds, there was a lot of bleeding but that was what I was going for!  I tried it with a drier background and more distinct stamping and didn’t like it as well.  Every child in the class was able to participate in painting the fabric.  And there was enough fabric made to make two 22″ pillows from each class. 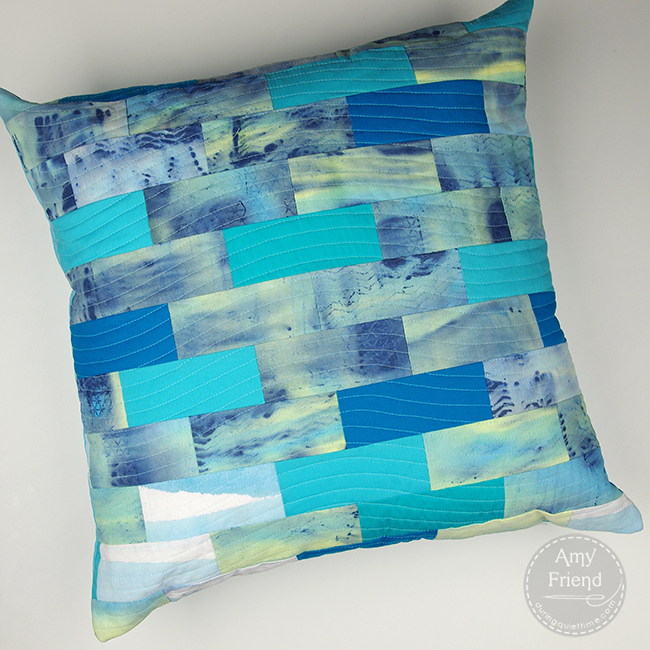 For this pillow, I used a simple brick patchwork, adding in some coordinating blues.  I particularly love the painted fabric when the children let some of the white fabric show through.  They were really opposed to that though!  I had to sneak some fabric away before it was “finished.”  They wanted to cover every bit of the white. 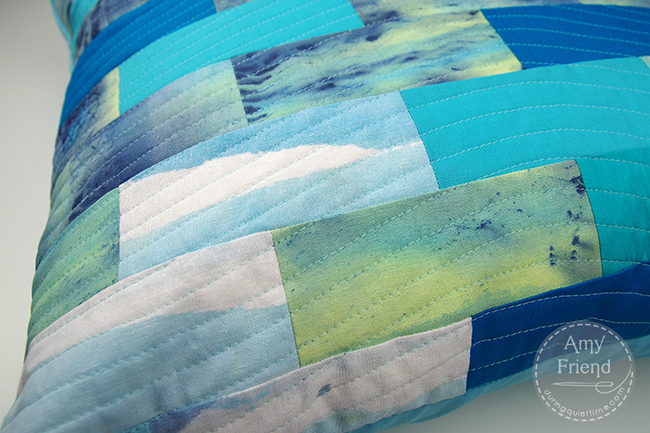 Here is a detail showing the colors of the handprinted fabrics.  It was a great project for collaborative learning too which is really promoted in our school system. 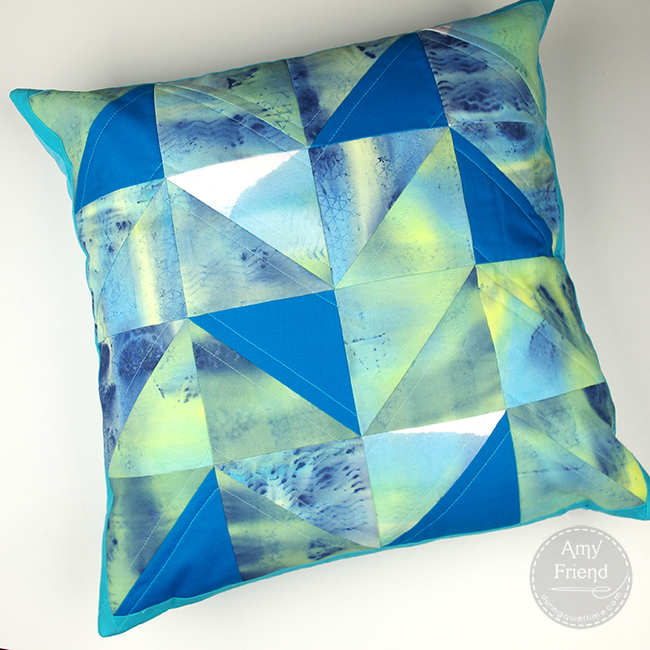 This is the second pillow from that class.  This one is a half square triangle design arranged in chevrons.  I am calling this set the “Sea” pillow set. 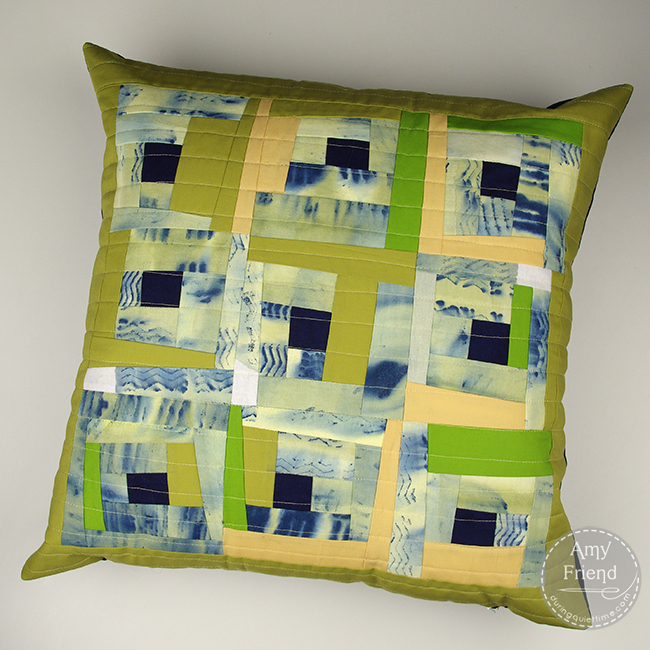 The other class created the “Earth” pillows. I tried to take into consideration the colors people tend to have in their houses.  I made wonky log cabin blocks for this pillow. 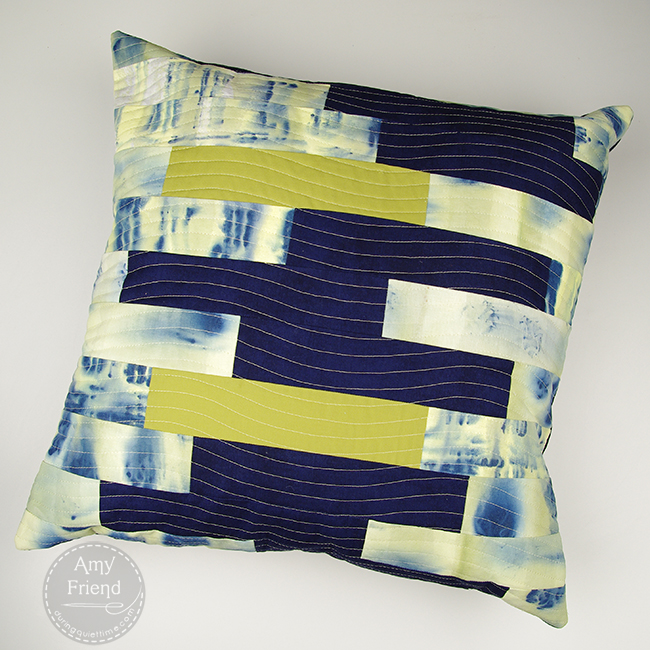 This pillow is a sort of staggered stacked coin patchwork. 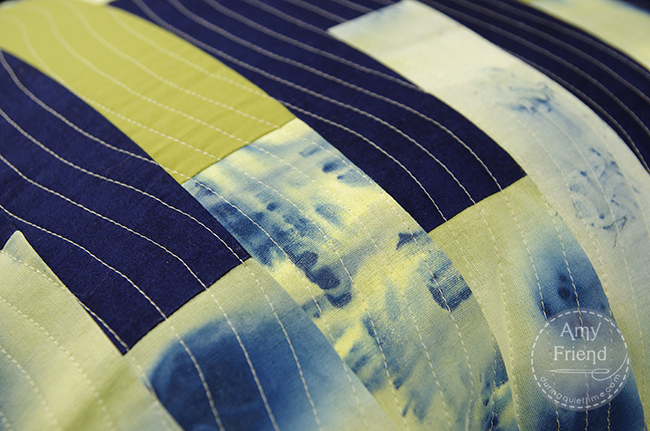 Here is a little detail of this “colorway.”

I think that the kids really had fun painting the fabric.  The finished fabric was fairly stiff. I had originally thought of appliqueing simple circles, etc. but I didn’t want to add any more stiffness using fusible adhesives so I opted for the pieced work.  My rotary cutter dulled quickly as did my needles!  I found that it was helpful to use a size 90 needle and I had to replace it half way through the pillow making.  I also ironed my seams toward the solids, away from the printed fabric, whenever I could to reduce bulk.

Now I am just hopeful that second grade parents will bid on these!