Have you heard about Massdrop?  I became aware of it recently when I saw news on social media about great deals on Aurifil and Liberty.  There’s a site called massdrop.com and they organize group buys for different online communities (in this case quilters).  The way a groupbuy works is that a bunch of people vote on what they want to buy, and then Massdrop negotiates with the company and orders it in bulk.  They then pass on the bulk discounts to the group.  The best part is that the more people that join the buy, the bigger the discount gets!

There’s been a poll for high quality quilting irons on the site and the community voted overwhelming in favor of the Oliso TG1600 Pro.  Massdrop approached Oliso and negotiated a great price.  The iron will be offered at a savings of around $50 (the Massdrop price is $119 compared to the usual $169) if 30 people commit to buying one.

Sarah Rosenberg was recently hired as Massdrop’s Quilting and Crafting “buyer” (how cool of a job is that), and she follows me here and on Instagram.  She noticed my IG post about the death of my previous iron, and has sent me an Oliso TG1600 to review for all of you to see.

I first tried an Oliso at Quilt Market in May.  The Oliso booth was in my line of view all day as I did demonstrations for Sizzix. I was finger pressing so, eventually, I went over for an iron demo and to see if I could press the blocks I was working on. I was impressed by the iron for a number of reasons.  Although my iron only arrived a couple of days ago, I just gave it a good workout putting together a quilt top and am happy to say that the features that intrigued me at market, held true at home. 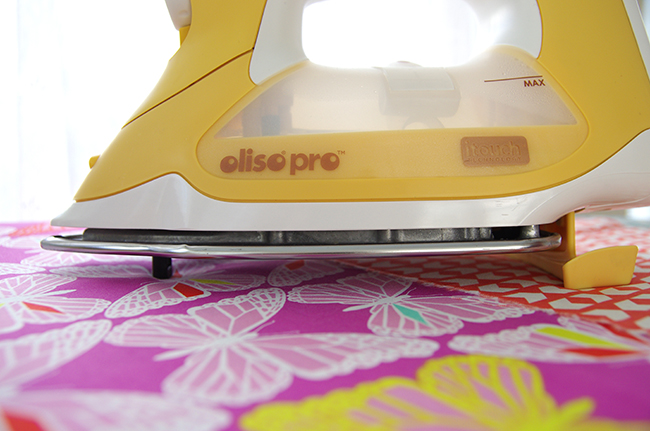 You might notice that in its resting position, the Oliso stays horizontal on the ironing board surface.  It can sense your hand letting go and once that happens, it automatically lifts itself up.  When your hand touches the handle again, it lowers into the ironing position.  In the image above, you can see how it rests hovering above the board.  Because the iron is fairly heavy, this helps with repetitive use kind of injuries.  But it also makes the iron so stable. At the demo in Pittsburgh, the woman in the Oliso booth actually tipped her ironing board back and forth to show me how the iron would not fall off. I really like this selling point because, like many of you, I sew in a house full of children.  Several times a day, I say, “Becareful!  There is a hot iron right behind you!”  My previous irons have been knocked off ironing boards several times. So I love that I have to worry a little bit less with the Oliso.  It really isn’t prone to tipping over.

If you just can’t get used to this feature and find yourself freaking out each time you see the iron resting horizontally, you can turn this feature off.  It does take some getting used to because we have all had it drilled into our heads to tilt an iron back so it doesn’t scorch your fabric or the ironing board.  But I am already getting used to this feature and I love it for the stability. Plus, it is kind of fun to see the iron pop up as soon as my hand releases it.  All my kids (including my husband) have asked to try it and think it is the coolest thing ever.
The other feature I really love is the delayed automatic shut off.  With previous irons, I have felt like I was playing beat the clock to stitch my next seam and get to the iron again before it shut off.  The Oliso stays on for 30 minutes before shutting off.  It’s great for quilters that way. I find that I really do need the automatic shut off because I just tried an iron without one and left it on accidentally for a few hours.  That’s scary. So I am happy to have an iron that will shut off but not too quickly!

I can’t speak to the longevity of this iron yet, but in addition to the special features listed above, I am also very pleased with the quality of the pressing. The iron has enough weight to it and gives a nice amount of steam (which is adjustable). Without using starch, I was able to get my seams to press really nicely in just a single pass.  The iron also has a particularly long cord which is a helpful feature in my sewing room. It gives me a little more freedom as to where I can place my ironing board and still reach an outlet!

If you are interested in purchasing an Oliso, this is a great way to get a good deal on it. Visit Massdrop by clicking this link and it will bring you right to the iron page!  This group buy goes live today, June 23rd.